Just a fix for that one new annoyance thing for now.

- Fix issue where "magic rope death fix" hack added in v1.33 would cause item animations to appear on the wrong character.

Larger things are in the works, but this hydra thing was sort of a high priority fix.

- Fix Z position of hydras, tropicallos, spring beaks, and snakes to 0 so they should always be hittable by any weapon on any map.  Also no longer allow hydras on lich map since they get all disconnected and weird.

- Fix animation of magic rope for girl and sprite to not allow them to be damaged during it.

A few small fixes for now.

- Adjustments to the difficulty of "enemies level on boss kills" setting for open world, which was a little too difficult on normal mode previously.

- Move the enemies in the NTR treasure room up 3 tiles, to avoid a potential softlock when having an autosave there and dying immediately upon load.

- Small fix to one of the nesoberi names in hint dialogue.

A quick bugfix and a few small features.

- Add minimum starting level option for open world.  If characters are set to join "at your level," they still will, but your first one will be the specified level.

- Add option (default on) to allow cup of wishes and revive spell to be used on characters that have 0 HP but haven't "died" yet (vanilla requires them to "see the reaper" before they can be targeted and revived).

- Add option (default on) to allow candy and chocolate to provide healing for characters that are at 0 HP but haven't "died" yet, similar to how Royal Jam can be used in vanilla.

- Fix issue where ROM generation would sometimes fail with an exception if Rina nesoberi was chosen for open world, because I forgot to set a couple of the images as embedded resources.  There was maybe a 1/80ish chance of this happening for any given seed, and it's been around for a few versions now.  Whoops!

- Fix hydras being unhittable on parts of the Spikey Tiger map.

- Force locale to en_us for decimal conversions so floating point options values always use "." instead of "," and can be parsed properly.

- Add option (default off) to remove damage canceling for moogle belt/midge mallet, or for items altogether.

- Add option for 4-8 gifts delivered (was always 8 before) in Christmas gift goal.

- Fix issue where snowman, engulf, or other movement-freezing status would lock up the game when stepping on a whip post with the recent change to speed whip posts up.

- You no longer have to face the correct direction to use the "fast whip" on whip posts; just step on the tile and it will face you the right way and jump.

- Elinee's nesoberi can now offer you up to 3 hints for randomly-chosen important items you don't currently have.  Walk above the nesoberi to pat it and receive a hint.  When you find that item, the hint will change.

- Add option (default on) to display a minimap in the corner for Flammie flight, with indicator of current position and direction. 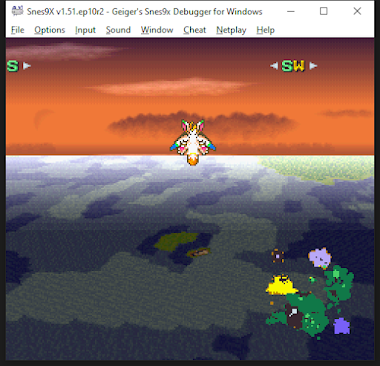 - Fix issue where MP absorb would eventually give 0 MP when enemies were set to have infinite MP.

- Tonpole has a normal, scaled amount of MP when boss element rando is applied (as opposed to being limited to 6), since his spell pool isn't limited to Cure Water anymore.

- Default-on open world option to automatically leap across whip post spots if you have the whip.  You don't need it equipped, or to use it -- just to own the whip and step there facing the correct direction.

- Fix a few boss/map combos that were found to be unhittable after 1.28's changes were added.  This includes:

Please let me know if there are any other maps where you have trouble hitting a certain boss.  If it's a run-stopping problem, you can use the bossFixedZ=yes option for now to revert to the way it used to determine boss Z values.

- Allow 12 letter name entries, and address a vanilla issue where moving the cursor on the name entry added an annoying delay before you could enter another letter.

- Option for enemies to have infinite MP.

- Lime Slime will now have a random flavor in open world.

- Option to disable trash weapons that come up a small percentage of the time.  They are still enabled by default.

- Multiplier for amount of gold in chests from enemies (default 50 * level, as before)

- Option to start with a specified amount of gold.

- Move the exp/gold from kills multipliers here, that were previously on the main screen.  Change them to a 0.0 - 1000.0 specified multiplier, versus the previous half/single/double/triple.

- Fix issue where autosave hack was not checking for overflow of rom bank and could cause crashes if it happened to be at the wrong spot in the rom.

- Add open world option to start with every weapon orb and replace those checks with money.

- Add option to assign random elements to bosses.  Most bosses will get a random new element along with a palette to match, and cast random spells from that element.  This is an initial drop of this which will need a little more work, but should be functional for now.

- Fix some issues with bosses being on the wrong Z level, and certain things not working, like Biting Lizard not eating your characters anymore.  The new way this works has not been tested for every boss on every map, so an option to put it back the way it was before was added for now as a workaround in case there are problems.

- Only autosave if one of your party members is alive, as a workaround to the issue where magic roping as girl or sprite, and dying during the animation, will cause you to be game-overed in your autosave.

- Vanilla game randomizer: swap locations of enemies, bosses, elements, and other things in the base game.
[Completion: ~85%]
- Open world: Grant access to Flammie immediately with various options for progression/difficulty/completion of the game.
[Completion: ~75%]
- Ancient cave: procedurally generate random dungeons, with random bosses and Mana Beast at the end.
[Completion: ~50%]
- Boss rush: encounter all bosses in a random order, while managing HP/MP resources to survive the whole gauntlet.
[Completion: ~65%]
- Chaos: Like Ancient Cave, but with vanilla dungeon maps randomly connected together.
[Completion: ~70%]

To be added sooner or later:

- Bingo: Open world mode but with in-game randomized bingo board as the primary objective.
[Completion: ~20%]

- CPU player warp: instead of getting stuck on the edges of the screen, players 2 and 3 will warp to you when scrolled off.
- Status indicators: flash player character palettes to indicate current status effects, similar to FF6/Chrono Trigger.
- Randomized weapons: with random status effects, elements, and names/descriptions pulled from a variety of sources.
- Magic rebalance: Adjust the costs and effects of some spells to account for being able to use them earlier in the game. Also, modify Speedup spell to grant movement/recharge haste effect.
- Imported music: various tracks from other games, most with Secret of Mana's sample set, some with their originals.
- Increased inventory size: Hold up to seven items instead of vanilla's limit of four.
- Autosaves: Automatically save the game to slot 4 on most door transitions.
- Various other things
For current bugs, planned features, etc. see the Discord!
(Last updated 04/01/2020)

v1.34
Fix animations on wrong character issue.
Open World Tracker by Cyber
Tracker is a plug-in for PopTracker by BlackSliver
Older, deprecated Tracker for Open World by Menblock can be found here.
Older downloads below screenshots.

Leaving other characters behind (gif)
Speedup as Haste spell (gif)

Buy multiple items at once

Various enemies with stats scaled down to current floor

Warper to next floor

Warper to next floor

v0.64
Some fixes and balance experiments.

v0.31
Fix an issue with bosses on forest maps.
v0.30
Add bosses.
v0.23
Increase spell leveling rate and Mana Beast HP.
v0.22
Fix a startup glitch in v0.21, Mana Beast tweaks, screen scrolling tweaks.
v0.21
Tweaks to difficulty and a fix for the Mana Beast door.
v0.20
Adds shops, changes some values, and fixes a bunch of stuff.
v0.12
Adds fixed restore NPC graphic, arrows for island tileset, and less of the same tileset in a row.
v0.11
This is the version with the two fixes from Falexxx1's test stream on 12/11.
v0.1
This is the version Yagamoth tested on stream earlier today (12/11). May still be very glitchy! Please report problems to me or post them here.